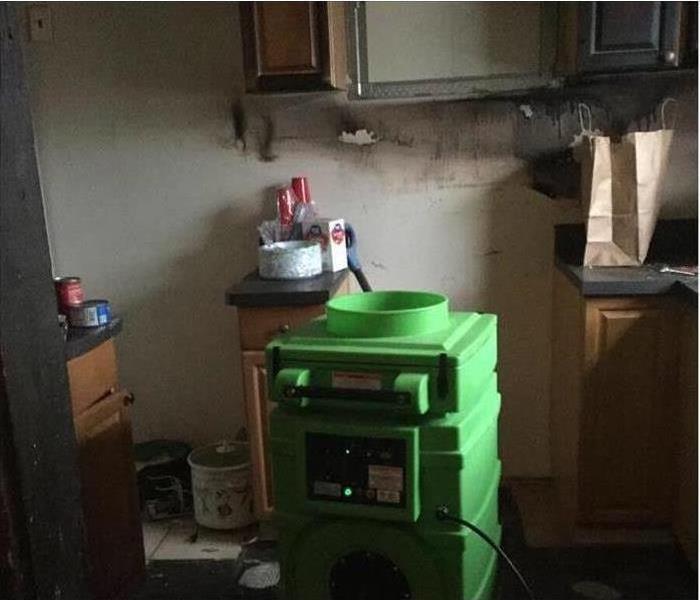 The air scrubber pictured here is outfitted with a HEPA filter to capture airborne particles as small as 0.3 microns after a fire.

When fire damage happens in a home, mainly if there is not much charring or smoke damage visible, many homeowners take the task on for cleanup on their own. Sometimes this is not a good idea.

San Jose homeowners with fire damage that do their own DIY cleanup may find there are issues still present. Some things, such as mold or odors, have the potential to spread. Here are some of the most common issues SERVPRO technicians see and what to do about them.

Foul Odors after a Home Fire

The problem with soot is the particles range from the visible to smaller than the human eye can see. Once airborne, such as in the HVAC ductwork, they spread. Anywhere they go, it smells like a fire happened, and porous items such as upholstered furnishings and carpet require deep cleaning. SERVPRO technicians such a multilayered approach to ending smoke odors through the use of air scrubbers and thermal foggers to eradicate odors. If necessary, they clean the ductwork in the home to rid it of any residual smoke odors.

If Water Gets Left Behind After a Fire, Mold Can Follow

Mold spores are already present indoors. They remain inert until favorable germination conditions occur. After fire damage happens and the area gets soaked by the fire department extinguishing it, if all the water is not extracted and dried, mold spores can set up home as fast as 24-hours and spread rapidly throughout the house. SERVPRO technicians use their detection equipment to scope the loss area and determine if any water migrated behind walls or under flooring. They ensure the property receives both drying and the application of antimicrobials to inhibit mold growth.

Cleaning Walls After a Fire

Walls can look clean and still smell terrible. This is because, during a fire, the hot air expands, this expansion forces suit into the paint on the wall. If solvent cleaning solutions do not cause the residue to release for cleaning, a sealant is a good solution that only requires priming and painting to look (and smell) like new.

Whether the fire damage just happened or you need some assistance after a DIY cleanup, call SERVPRO of Campbell at (408) 371-4001. Their certified technicians can make the fire loss in your home, "Like it never even happened."