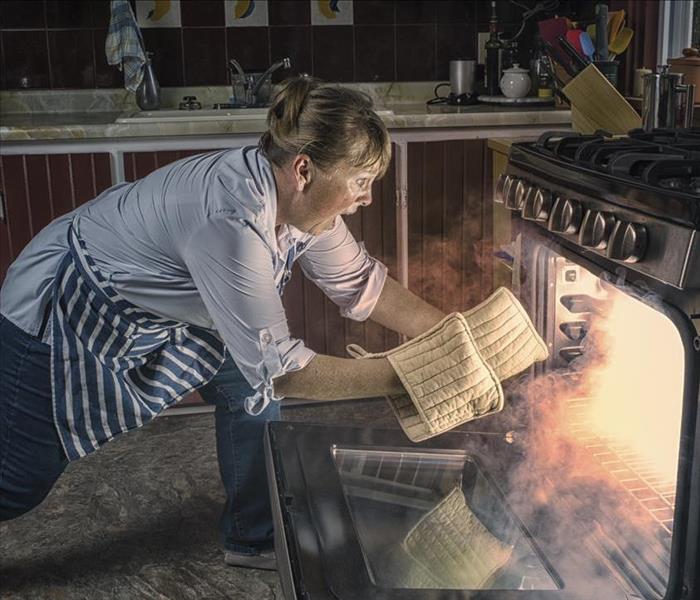 Stinky Kitchen FIre Odors Got You Down? SERVPRO Provides Cleanup for San Jose Cooks--Residential and Commercial

Fire damage is not a one-size-fits-all category when it comes to clean up. Depending on the type of fire, whether it was high heat or slow moving and materials that burned, all of them leave different types of residues and odors that need to be handled in various ways. Among the kinds of damage from fires we remediate most often, protein residue is one of the most pungent we encounter. No one wants to be reminded of the time dinner caught on fire from the odor that remains.

When SERVPRO was called to remediate fire damage in a San Jose kitchen, the culprit was immediately apparent; it was from a chicken that was forgotten in an oven and was too close to a heating element. Protein fires are caused when food items burn. They generally have minor amounts of residue but leave a significant amount of foul odor. At the initial phone call, we instructed the homeowner to turn off their HVAC to avoid spreading any particles and odors to currently unaffected areas of the home.

Once on site, SERVPRO technicians wiped down all the kitchen surfaces with our professional-grade cleaners to remove the greasy protein residue, and this action helps lessen the odor. Then our certified Odor Control Technicians inspected the area and determined the best course of action would be to contain the kitchen area and use an activated oxygen unit overnight and follow up with a thermal fogger both inside and outside the contained area to neutralize the odor. Thermal fogging is very useful as it binds with odor-causing particles and eliminates them. This method is not just covering up one odor with another.

Sometimes fire damage is not from the flames, but the odor left behind. This is not a situation you have to handle on your own. Call SERVPRO of Campbell at (408) 371-4001, and one of our certified technicians can help you get rid of unpleasant odors from a cooking mishap.